The Will to Survive

How strong is your will to survive?

Here is the story of a young girl who tenaciously persisted in outlasting her abuse and abandonment issues.

She was born into an impoverished family in Buffalo, New York. She had no father in her life. Her mother worked out of town and was never available. Her mother shuffled from her grandmother to foster care and back again.

Raped as a pre-teen, she became pregnant. During her pregnancy, she testified against her perpetrator and signed the papers to give her baby up for adoption. She felt dirty and ashamed of her circumstances.

She knew the only way out of her situation was to study hard and get good grades. After graduating from high school, she married and had two little boys. Her husband abandoned her and the children, leaving her destitute.

She lived on welfare, joined the PTA, put her sons in Little League, and went back to school. After graduating from college, she found a job as a librarian at the University of Nevada in Las Vegas.

I met her in Vegas just after her twenty-two-year-old son was killed in a hit-and-run accident on his way home from work. She was devastated!

She didn’t know where to turn. She had poured al her energy into raising her two sons. They were her life.

The tragedy of her son’s death was a turning point in her life. She wished to surround herself with the love of family, friends and neighbors. She wanted an abundance of devoted relationships at the center of her existence.

She set about creating that world.

She reconnected with her mother and aunt. She found her adopted son. She loved her younger son and three wonderful grandchildren. She visited her white-haired neighbors each day and has surrounded herself with loving friends in her church and community.

“You Can Do It” by Carol-Ann Swatling is a workbook she authored during her healing process. It is a testimony to her will to survive and bring light and love into the world. She is an example of choosing to live and love abundantly. Happiness is her reward. 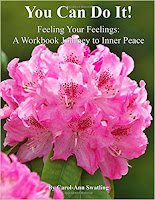